According to the CSET website, there will be 7 multiple choice questions and no Constructed Response Question.

a. Describe a variety of energy resources, including fossil fuels, nuclear fuels, solar, and biomass

Fossil fuel: Includes natural gas, coal, and petroleum. Fossil fuel is a nonrenewable resource that comes from plants and animals that died millions years ago. Fossil fuels are made out of hydrocarbons. The transformation from dead organisms into fossil fuel involves pressure, heat, and time. The overall efficiency of extracting energy from fossil fuels and converting it to electricity is approximately 35%.
Coal: Forms from the remains of plant and tree.  Coal contains significant amount of sulfur, which becomes noxious sulfur oxide gases which undergoes chemical reaction to convert into sulfuric acid.  There are different types of coal that can be burned for fuel. Listed from lowest rank (least efficient) to highest rank (most efficient): lignite, subbituminous, bituminous, and then anthracite (which is the most metamorphosed type of coal and burns the most efficiently). Most abundant and burned fossil fuel in the world is coal.
Natural Gas: Forms when the buried layers of plant and animal remains undergo intense heat and pressure over thousands of years.
Petroleum: Formed from the remains of ancient marine organisms that were buried under sedimentary rocks. After undergoing intense heat and pressure for millions of years, they were transformed into the carbon-rich fuel.


Nuclear fuel: comes from power plants that converts radioactive materials into energy through nuclear fission. This process involves the bombardment of a heavy nuclei, normally uranium-235, with neutrons. The ejected neutrons then, in turn, continue to bombard nearby heavy uranium nuclei and a chain reaction results. This reaction produces heat energy. No production of greenhouse gases but it does produce radioactive waste.

Wind: a form of solar energy. Winds are the result of the uneven heating of the atmosphere by the Sun as well as the rotation of the Earth and the irregularities of the Earth's surface. The wind is harvested by wind turbines to generate mechanical power or electricity.

Hydro-power: energy that comes from hydro-power is harnessed from moving water

Quick Quiz!
The fuel that is being mined in this illustration is:
a) fossil
b) nuclear
c) wind
d) solar 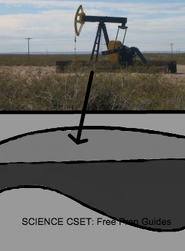 Earth resources are broken up into different categories: biotic and abiotic. Biotic resources come from the biosphere and are living things. Resources from a biosphere include animals such as fish or plants such as leaves. Abiotic are resources that are from non-living origins. These include rocks, minerals, water, and air.

Minerals- Minerals are extracted from earth crust and are used for building roads, abrasives, ceramics, and fertilizers. These are called industrial rocks and minerals. Minerals extracted from ores are minded at a profit. List of the most abundant elements in the Earth's crust:
Oxygen at 47%
Silicon at 28%
Aluminium at 8%
Iron at 5%
Calcium at 3.5%
Sodium at 3%
Potassium at 2.5%
Magnesium at 2%
All other elements is at 1%


Water- Water is a renewable energy and is used in a variety of ways to provide the resources that we need. Water may be used to provide energy, called hydroelectric. This method involves falling water to drive turbines, which then produces energy. Water is also used for human/animal consumption, either in it's pure liquid form or in foods and drinks. Farms require large amounts of water to grow food. Many industries require water such as power plants (used for cooling), oil refineries, and manufacturing plants.Dams can be used to collect surface runoff.
Fresh water is a limited, renewable energy resource. Approximately 3% of water on our Earth is fresh. And of this very small percentage, 2/3 of it is frozen in the form of glaciers or polar ice caps. Fresh water is used to irrigating crops (approximately 40%), drink, bathing, etc. It comes from rivers, lakes, rain, snowmelt, or undergrown aquifers.

Energy resources can be categorized into two categories:
Non-renewable resources: formed in Earth, but the process that is used to create them are so slow that can take millions of years to produce significant quantities. They cannot be replaced as fast as humans use them up. Examples: fuels such as petroleum, natural gas, and coal; metals, such as iron, gold, copper. Some of these resources can be recycled such as aluminum.

d. Compare extraction and recycling in relation to energy, cost, and demand

Resources, such as minerals, that are extracted can sometimes require less cost than recycling. Recycling is a complex process that system requires vehicles to transport materials, sorting of the items, and the actual process (crushing glass, baling plastics, etc). However, sometimes the process of recycling is cheaper than the process of extracting resources from earth. Recycling also helps to reduce the emission of greenhouse gas, landfill use, and reduces the extraction of more resources.

Human population is growing at an exponential rate. Our demand for resources are very high (food, water, clothing, natural gas, coal, electricity, etc). Thus, there is a need to find methods to extract resources or produce resources at a low cost. Recycling sometimes provides resources at a lower cost than the process of extraction.

Alternative Energy Sources:
Nuclear Energy: approximately 8% of energy is produced by nuclear power plants. The fuel source is from radioactive materials that release energy by nuclear fission (bombarding heavy atoms to split into smaller nuclei, which emits neutrons and heat energy. The ejected neutrons then bombard nearby atoms, causing a chain reaction).
Pro:
1) Does not emit carbon dioxide
Cons:
1) Cost: very expensive to build a a nuclear facility that contains numerous safety features.
2) Safety: A big concern is radioactive debris escaping during a meltdown or a malfunction. Disposal of nuclear waste is another area of concern.


Solar Energy: use of the sun's rays to supply energy. Passive solar collectors is most widely used. Examples: south-facing windows, greenhouses, and sun rooms. The sunlight passes through the glass windows and is absorbed by the objects in the room. The object then radiate heat that warms the air. This method can cut heating costs. Active solar collectors are much more elaborate and complex. Panels collect the sunlight and stores it for later use.
Pro: Solar energy is free. In regards to the active solar collectors, it can be very economical in many parts of the US, especially as prices for other fuels continues to increase.
Con: In regards to the active  solar collectors, the con is the initial cost for the equipment and installations.


Wind Energy: moving air has kinetic energy. A portion of that energy can be converted to other forms of energy such as mechanical or electricity. Wind energy can pump water, propel boats, generate electricity, and grind grains.
Pros: clean source that does not release harmful products into our environment, free renewable wind source, economical
Cons: noise pollution, fluctuations in wind, blades can injure wildlife

Hydroelectric Power: 3% of the countries demand for energy is met by hydroelectric power. Most of the energy is produced at large dams.
Pros: renewable, generating electricity with hydroelectricity does not cause pollution, and safe
Cons: environmental consequences (change water flow, affect fish life), expensive to build dams, will not work if there is a drought


Tidal Power: harnessed by constructing a dam across the mouth of a bay or an estuary in a area that has a large tidal range. The flow of the tides is used to drive turbines and electrical generators.
Pros: no fuel is required, renewable, clean, efficient and reliable
Cons: expensive to build, disrupts regular tide cycles, impacts marine wildlife such as affecting mud flats where birds feed


© Science CSET: Free Prep Guides, 2008. Unauthorized use and/or duplication of this material without express and written permission from this blog’s author and/or owner is strictly prohibited. Excerpts and links may be used, provided that full and clear credit is given to Science CSET: Free Prep Guides with appropriate and specific direction to the original content.