According to the CSET website, there will be 6 muliple choice questions and no Constructed Response Question.

a. Describe and provide examples of electrostatic and magnetostatic phenomena

Electrostatic is a phenomena that comes from the forces that electric charges exert on each other. The force is between two charges. If they are of opposite charges, then they attract each other, and if they are the same charge, then they repel each other. Electrostatic occurs when there is a buildup of charge on a surface of an object. This may be due to contact with other surfaces. The electrostatic force between these charges are very strong and is difficult to separate opposite charges. Examples of electrostatic phenomena include static and electricity produced from a magnet.

Magnetostatic is the study of magnetic fields. Magnetostatic phenomena explains that charges are either stationary or in a direct current.

b. Predict charges or poles based on attraction/repulsion observations

Objects that are strongly magnetic are called ferromagnetic. They may either be hard (which doesn't lost its magnetism after being magnetized easily; or soft, which does lost its magnetism after being magnetized). When an object is magnetized, all the dipoles (molecular magnets) become aligned. A magnet's pole is a point in a magnet at which it's magnetic force is concentrated. The two poles, north and south pole, point to it's magnetic pole, south or north magnetic pole. The first law of magnetism states that like poles repel and that unlike poles attract.

A compass uses a lightweight magnet and a low friction pivot that allows the magnetic needle to point to the magnetic north (North Pole).

3) Floating object such as a cork or bottle cap.

Stroke the needed 20-30 times with the end of a bar magnet. This process will magnetized the needle, a process called single touch. Place the magnetized needle on top of the floating object and place the items in a shallow dish of water. Slowly, the needle will move so that it aligns with the magnetic north pole. Using the marker and the masking tape, you can now label the dish with north, south, east, and west.

d. Relate electric currents to magnetic fields and describe the application of these relationships, such as in electromagnets, electric current generators, motors, and transformers

Electromagnetics have several applications, all of which attract metals when they are switched on. They convert electric energy to mechanical energy.

Electric motors uses the Lorentz force (a current-carrying wire that goes through a magnetic field which can produce movement) to transform electrical energy into mechanical energy. 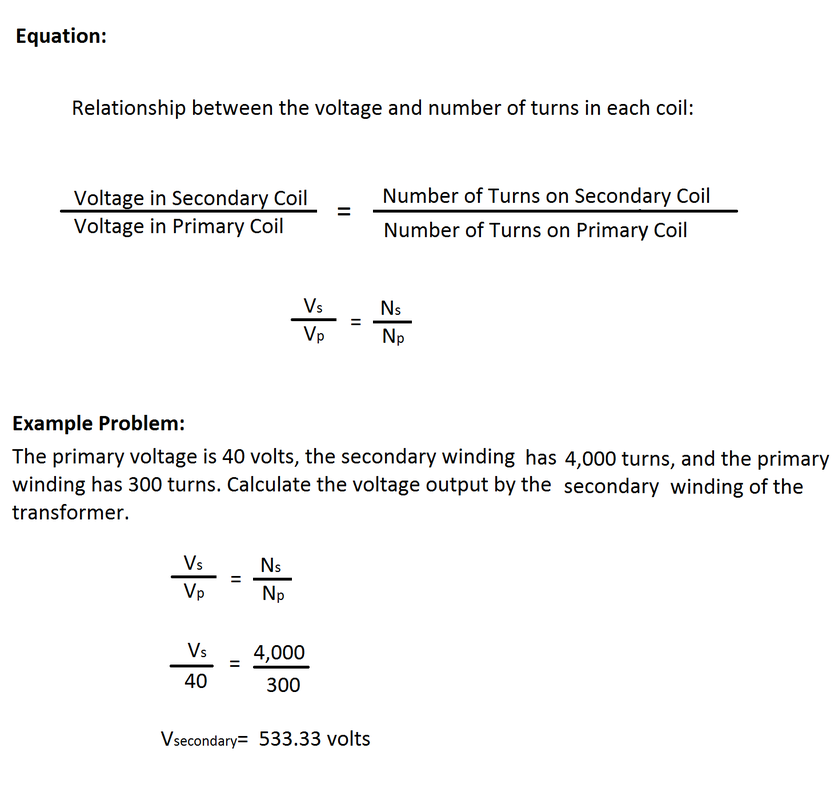 A simple circuit consists of three elements: a source of electricity (such as a battery), a path or conductor for electricity (electrons) to flow through (such as a wire), and an electrical resistor (such as a light bulb). The flow of electrons starts from the low potential terminal (negative terminal) of the battery, passes through the light bulb, and back to the high potential (positive terminal)  of the battery. Current flows from high potential to low potential.
Christmas lights can be an example of a simple series circuit. If you take a bulb out, then the rest of the lights will not be lit anymore. This is because there is now an open circuit and the current can no longer flow through the circuit.
A flashlight is another example of a simple series circuit, with a switch, light bulb, battery, and wires connected to form a circuit, .

In a parallel circuit, electrons has several paths that it can take. For example, in a parallel circuit, there could be two resisters, such as light bulbs, on two different wire paths. Electrons can choose which path through the resistor to take. The total current is equal to the sum of the currents in the indiviual paths. I= I1 +I2 + I3.... All elements have equal voltage. V= V1 = V2 = V3.... The total resistance decreases as more paths with resistors are added to the circuit. 1/R = 1/R1 + 1/R2 + 1/R3... Total resistance is always less than the smallers individual resistance.
This of a light switch that controls the lights in a hallway at home. If one of those lights goes out, the other still stays lit.

Power is the force motivating electrons to flow, called voltage. It is the measurement of potential energy that is relative between two points. Voltage is measured in volts. To solve for the voltage (E), you multiply current (I) times resistance (R).

Current is the continuous movement of electrons in a circuit.

Resistance is the opposition to motion. Resistors are important otherwise too many electrons will move through the circuit.

Find the total resistance for both a series circuit and parallel circuit: 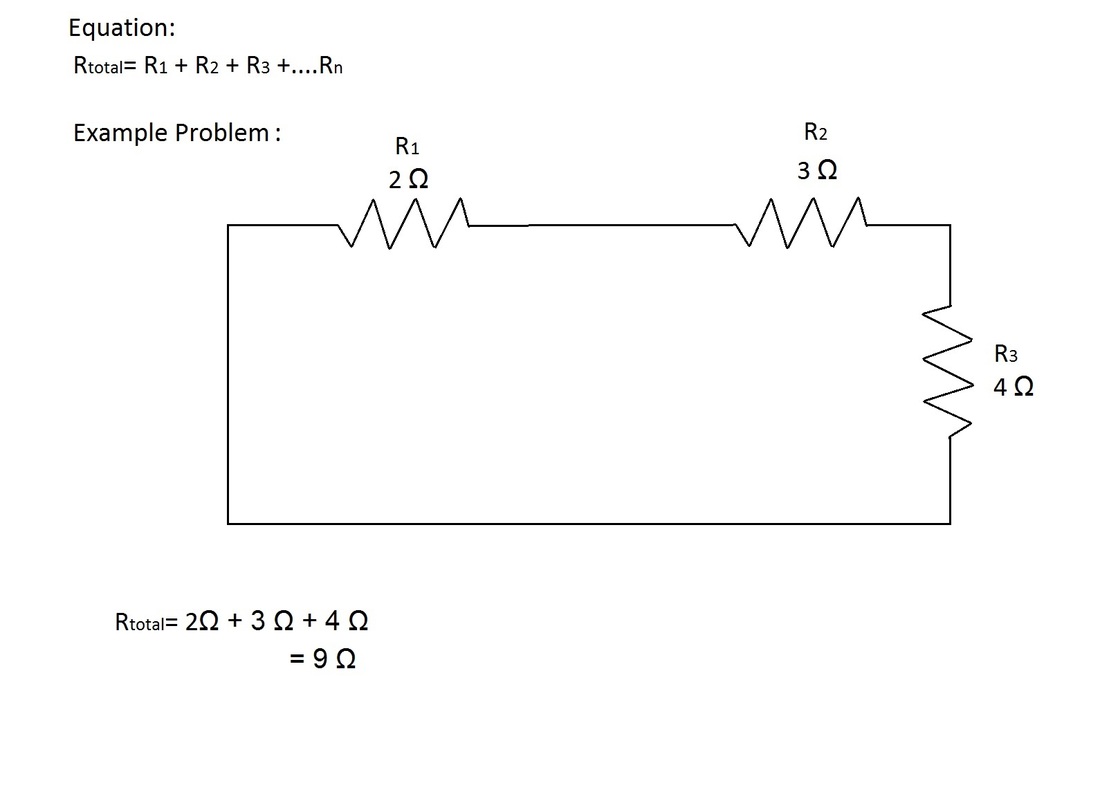 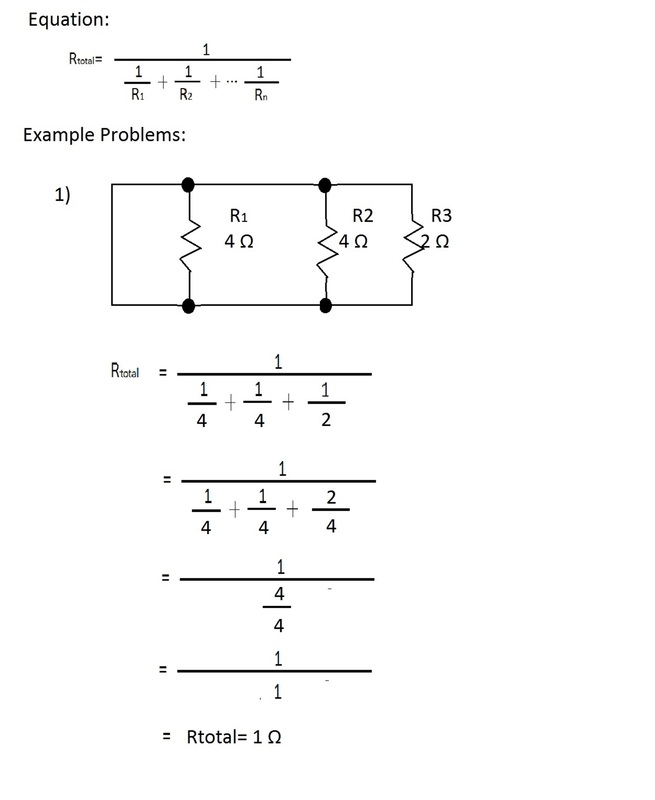 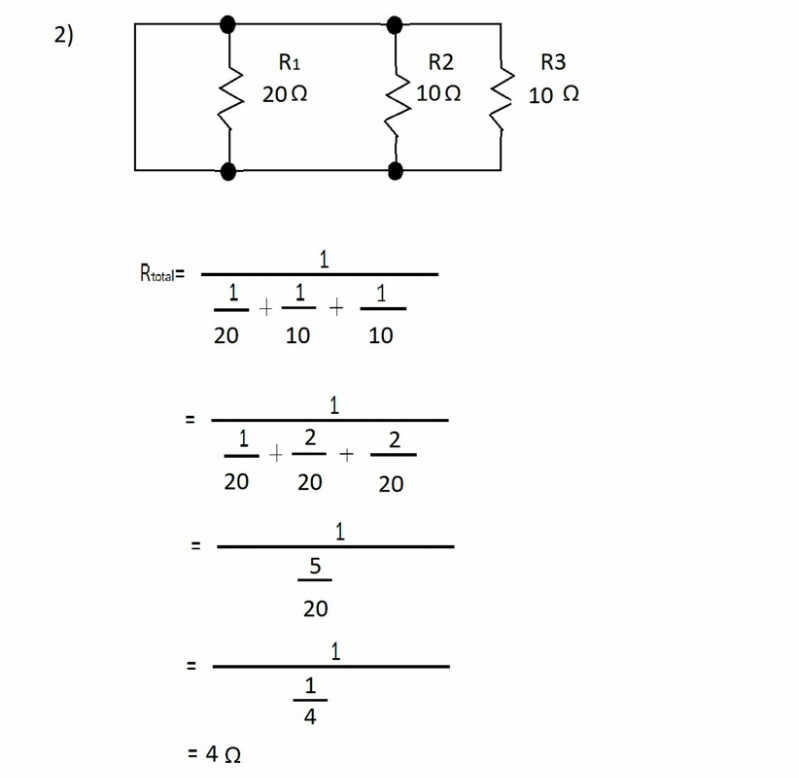 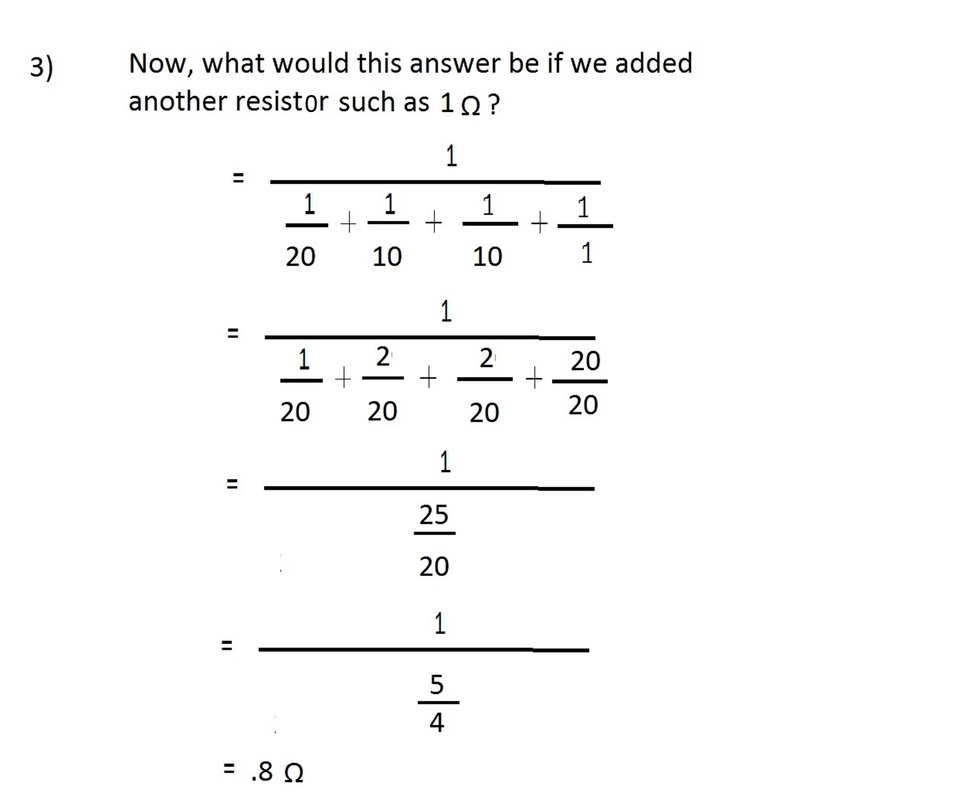 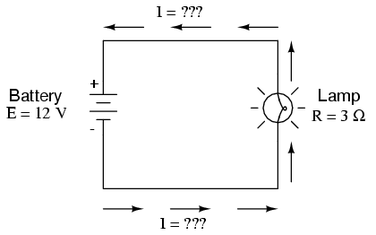 Using the illustration above, we can find the total current using Ohm's Law:
I= 12 V/3 ohm