According to the CSET website, there will be 15 mulitple choice questions and one Constructed Response Question.

Apply: A spaceship traveling in space does not need any fuel to keep moving as there is no friction (such as air) to slow it down.

Friction: this is the force which acts to oppose the motion of two touching surfaces over each other. It is caused by the intermolecular force of attraction between the molecules of the surfaces. There are two kinds of frictional force:
Static: force between two touching surfaces when a force is applied to one of them but they are not moving
Kinetic (sliding): force where one surface is moving over the other one at a constant speed


Newton's Second Law- If the mass of an object is constant, then the force is proportional to the acceleration of the object. Force= mass x acceleration (F=ma). If the momentum of an object changes, for example if it accelerates, then there must be a resultant force acting on it. Force = change in momentum / time. Momentum = mass x velocity


The amount of acceleration depends on the object's mass and also the strength of the net force. Newton's Second law tells us what is happening to an object when a net force is present. This law also helps to explain why you can throw a golf ball further than a shot-put. Because the mass of the shot-put is greater than that of the golf ball, that the same force your arm provides to the shot-put results in smaller acceleration. Compared to the golf ball, the shot-put, with its smaller acceleration, will have less speed and thus will travel a shorter distance. An object has an acceleration if its velocity changes in any way, whether in speed, direction, or both. For example, if an object is slowing down, it is accelerating.

Apply: A baseball thrown by a pitcher accelerates as the pitcher applies a force by moving his arm.


Newton's Third Law- “For any force, there is always an equal and opposite reaction force.” According to the second law, if a person standing on earth has a downward force, then they would continue accelerating downward. But, we know that they don't. That is because as you exert a downward force on the Earth is offset by an equal and opposite force that pushes upward on you by Earth.

Apply: A rocket blasting into outer space is propelled by a force equal and opposite to the force with which gas is expelled out its back.


Newton's Law of Universal Gravitation- “F=Gx Mm/d2.” This law states that there is a gravitational force of attraction between any two objects that have a mass and this force depends on the mass of each object and the distance between them.

Apply: The gravitational force between Saturn and one of its moons, Tethys, can be calculated from their masses and the distance between them.

b. Define pressure and relate it to fluid flow and buoyancy (e.g., heart valves, atmospheric pressure)

Pressure is the force, which acts at right angles, that is exerted by solid, liquids, or gases on a unit area of a substance (solid, liquid or gas). Pressure is found by force/area. Within a vessel of water that has three holes, one of the top, one in the middle, and one on the bottom, the force of the water fluid flowing out of the holes will differ. The water flowing out of the bottom hole has greater pressure and shoots out further than the water flowing out of the top most hole. There is less water molecules pressing down on the water near the top hole so there is force and thus, less pressure, whereas it is the opposite for the bottom most hole.
Pascal's law of fluid pressures: states that pressure applied anywhere to a body of fluid will cause the force to be transmitted equally in all directions. the force acts at right angles to any surface in contact with the fluid.

According to Archimedes Principle: “Any object, wholly or partly immersed in a fluid, is buoyed up by a force equal to the weight of the fluid displaced by the object.” So, when an object floats, not just its weight is considered but the amount of water that is displaced. That is why a very large ship can float on water, whereas a penny sinks.

c. Describe the relationships among position, distance, displacement, speed, velocity,acceleration, and time, and perform simple calculations using these variables for both linear and circular motion

Circular motion- circular motion is the movement of an object in a circle at a constant speed. As the object moving around the circle is undergoing velocity changes (as its direction is changing), the object is in constant acceleration.

Angular velocity- this is the measure of the angle moved through per second. It is measured in radians per second.

Displacement is the change of position in a particular direction.

Time- the time it takes for an object to make one revolution. The units are measured in seconds.

The speed of an object moving in a circle is:

In the simplest cases, the speed, mass and radius is constant.

d. Identify the separate forces that act on a body (e.g., gravity, pressure, tension/compression, normal force, friction) and describe the net force on the body

Gravity is the force of attraction between two objects which have mass.

The pressure on an object is the force exerted by a liquid, solid, or gas on a unit area of the object (solid, liquid, or gas). The smaller the area the pressure force acts on, the greater the pressure.

Another force that act on a body is tension. Tension occurs when equal and opposite forces are applied to the ends of an object and pulls the object apart. The molecules are held together by the intermolecular force of attraction.

Compression is the force opposite of tension. The force also has equal and oppositve forces that is applied to the ends of an object that decreases the length of an object. This force is opposed by the intermolecular force of attraction.

Normal force may be the most common force that acts on a body. Occurs when two bodies are in direct contact with each other and are perpendicular to the body that applies force. An example is a man standing on a platform. Gravity pushes the man down, while the platform counteracts the force pushed down on the man. This force is called normal force. This force is an example of Newton's third law (every force has an equal and opposite reaction force).

Friction is the force that acts to oppose the motion of two touching objects over each other. It is caused by the intermolecular force of attraction between the molecules of the surfaces. 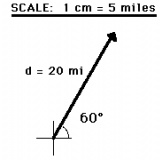 This drawing of a vector has a scale of 1 cm=10 m/s. Find the magnitude and direction of the vector.

Magnitude is 2.5 cm, so it's 25 m/s. The direction is 45 degrees. The arrow is moving in a counter=clockwise direction.

f. Identify fundamental forces, including gravity, nuclear forces, and electromagnetic forces (magnetic and electric), and explain their roles in nature, such as the role of gravity in maintaining the structure of the universe

There are four fundamental forces that governs what happens in the universe:

Gravity acts like glue, holding stars, planets, and galaxies together. Gravity causes dispersed materials to coalesce (for example, in the formation of our solar system); it is responsible for keeping planets and comets in orbits around the sun; it is responsible for keeping satellites in orbit; gravity causes tides ; gravity helps control the starts temperature, allowing the star to expand when its core temperature increased, and increases in gravitation if the stars core temperature cools too much; and is a dynamic process that helps shape the Earth through processes such as weathering, erosion, and plate tectonic movement.

Nuclear force is the force responsible for binding protons and neutrons in the nucleus. This residual strong force prevents the repulsion between the protons from pushing the nucleus apart. This force is very strong (strongest of the four fundamental forces) but has a short range.

Electromagnetic force, unlike gravity, depends on electrical charge instead of mass. It is carried via photons and holds atoms and molecules together. It effects positively and negatively charged particles. Both magnetic and electric forces are a result of photon exchanges. In electric force, like charges repel, and in magnetic force like and unlike repel.

The weak force plays a role in nuclear reactions, fusion and fission. It is also the only force, besides gravity, that effects neutrinos. It also plays a role in radioactive decay.

Inclined plane is a plane surface that is placed at an angle to the horizontal. An advantage to this machine is that it is easier to move an object up the inclined plane than it is to move it vertically upwards.


© Science CSET: Free Prep Guides, 2008. Unauthorized use and/or duplication of this material without express and written permission from this blog’s author and/or owner is strictly prohibited. Excerpts and links may be used, provided that full and clear credit is given to Science CSET: Free Prep Guides with appropriate and specific direction to the original content.