According to the CSET website, there will be 8 multiple choice questions and no Constructed Response Question.

Waves transport energy without displacing the medium permanently. Refraction is the change in direction of a wave when it moves from one medium into another. Different kinds of waves have different characteristics. Electromagnetic waves: transverse waves (oscillates at right angles to the direction the energy is moving). Carries energy (also known as radiant energy).

There are three important characteristics: frequency, wavelength, and amplitude:

There are two main types of waves:
Mechanical Wave: waves that oscillates and transfers energy through a medium. Transports energy only, there is no material that is transported through mechanical waves. These waves can only be produced in media which possess elasticity and inertia.

Sound waves- sound waves are longitudinal waves. Sound waves are able to travel through solids, liquids and gases. They are unable to travel though a vacuum space due to the lack of mediums to carry the vibrations. The speed at which sound waves move depends on the medium it is traveling through. Through dry air, sounds travel at around 334 meters per second. Sound has a wide range of frequencies. Human ear can detect sounds between 20 and 20,000 Hertz. Higher or lower frequency cannot be perceived by humans and are referred to as ultrasound and infrasound.

Light waves- light waves are electromagnetic type waves, which are transverse waves. Light waves are produced by the sun and by any heated object until it glows (called incandescence). Different wavelengths in the waveband produces different colors. The speed of light is 299, 792, 458 meters per second. Light, which can act as particles or a wave and does not require a medium to travel, thus light can travel through the vacuum of outer space. When a light waves moves through a new medium, its direction in which they are refracted depends on the density of the medium.

b. Explain that energy is transferred by waves without mass transfer and provide examples

All waves transport energy without permanently displacing the medium through which they are travel. Instead, waves travel through oscillations or vibrations around fixed locations. For example, a boat resting on a lake or ocean is bobbing up and down as the waves travel, but the boat stays primarily in the same location. This is how the matter itself is. The matter stays primarily in the same location as the particles vibrates or oscillate through the medium.

c. Explain how lenses ar﻿e used in simple optical systems, including the camera, telescope, microscope, and the eye

Light rays are refracted when it passes through curved surfaces, lens (laws of refraction of light). The bending of the light is a result of light being slowed down as it passes from one medium (air) through another medium (the lens).
There are two types of lens: concave and convex.
Concave lens has at least one surface curving inwards and acts as a diverging lens. Images formed by concaves lenses are
Convex lens has at least one lens that curves outward. Simple optical systems uses one or more lenses to focus light and produce an image.

Camera- the camera uses several kinds of lens, which can be moved to focus on images at different distances, and mirrors to capture an image.

Telescope- A refracting telescope lens works to refract (bend) light that enters the eyepiece. Because the bent light moves through the telescope and crosses at a point, the image is upside down (there are lens, however, such as the Barstow lens, that may flip it right side up). In a reflecting telescope, it uses curved mirrors to bounce the light instead of using lenses (this method prevents light from being bent, which causes colors to change and light to be unfocused).

Eye- one of the features of the eye is the cornea, which works just like any other lens. The cornea focuses the light rays and bends (refracts) them onto the lens (biconvex, also known as double convex) so that they come to a point on the retina. The upside-down image is formed on the retina and is corrected by the brain. If an object is near, the lens changes its shape to short and fat, and if an object is far away, the lens becomes flat and thin.

d. Explain and apply the laws of reflection and refraction

Driving at night, your car's light bounces off of the pavement. The car light beams move towards the road (parallel incident rays) strikes the irregular surface. The normal direction for each ray is different as the reflected rays are scattered.

Laws of refracted of light:
1) The refracted ray lies in the same plane as the incident ray and normal at the point of incidence.
2) Known as Snell's Law- the ratio of the sine of the angle of incidence to the sine of the angle of refraction is a constant for two given media. Snell's Law describes the relationship between the angle of incidence and the angle of refraction.
As a light passes through an object its density will determine the speed of its passes. The more optically dense the material is, the slower the wave will move through the material. One indicator of an objects optical density is the refraction index. This is the number which indicates the power of refraction of a given medium relative to the previous medium. You find this number by dividing the speed of the incident ray in the first medium by the speed of the refracted ray in the given medium. For example, the refractive index of water is 1.33. This number indicates that the light travels 1.33 times slower in water than in a vacuum.

A rainbow is formed when incident light rays pass through raindrops present in the air. Each drop slows down the light, causing the light to disperse and emit colors of the visible light spectrum. 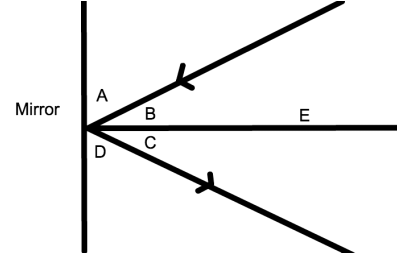 When light rays hits an object, there are several things that may happen to the light. The light may undergo transmission, be reflected, or absorbed.

Transmission- light transmission is the percentage of incident light that passes through a matter. If the matter light is passing through is translucent, then the vibrations of the electrons, which vibrate for brief periods of time, are passed on to neighboring atoms through the bulk of the material and remitted on the opposite side of the object.

Reflection- if the incident light rays strikes an object and it is opaque, then the electron's vibrations are not passed from one atom to the next through the material. Instead, the electrons on the material surface vibrates for short periods of time and reflects the light rays.